In this collaboration, spheroids of HT-29 tumour cells were aggregated and grown in 3D CoSeedis™ chips. After aggregation and initial growth phase, they were assessed for their diameter, weight and mass density using the W8 physical cytometry instrument from CELLdynamics. 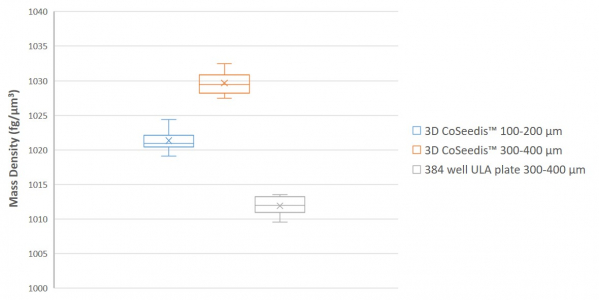 HT-29 spheroids generated in 3D CoSeedis™ showed a significantly higher mass density, hence compactness, when compared to similar spheroids of equal size grown in ultra-low attachment (ULA) plates. This is a clear indication that the HT-29 spheroids grown in 3D CoSeedis™ mimic a phenotype that is physiologically very close to what is observed in tumours from patients. Compact cell density is reported to be responsible for the establishment of gradients (e.g. nutrients, oxygen, waste products, etc.) and consequently the formation of quiescent tumour cells or even necrotic cores. 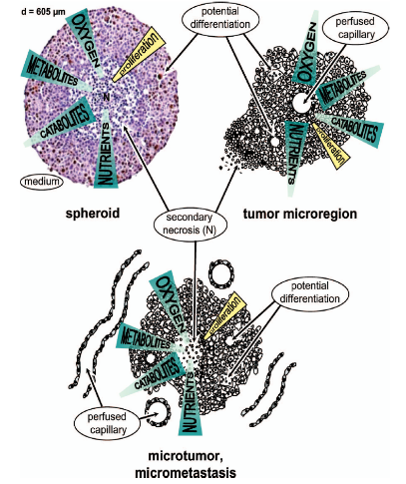 A recent publication by A. Sargenti et al. (Physical Characterisation of Colorectal Cancer Spheroids and Evaluation of NK Cell Infiltration Through a Flow-Based Analysis, Frontiers in Immunology, December 2020 | Volume 11 | Article 564887; doi: 10.3389/fimmu.2020.564887) has further shown the importance of spheroid structure and mass density in response to NK cell-mediated cytotoxicity. In addition, the authors state that mass density may indeed be a more reliable parameter than diameter or volume in anti-cancer compound testing. Consequently, they emphasise standardised and reproducible culture conditions in order to receive highly homogenous and uniform spheroids for the evaluation of anti-cancer drug efficacy, including therapeutic antibodies and immunotherapy.

In summary, 3D CoSeedis™ represents an ideal tool to produce highly homogenous and uniform spheroids in large quantities for downstream applications such as high-throughput or high-content compound screening or testing.